For those of you questioning the way to tell your children about Santa Claus, here is a sweet story on combining that with training. Delete if inappropriate for this group.

I remember tearing across town on my bike to visit Grandma on the day my brother dropped the bomb: “There is no Santa Claus,” he jeered. “Even dummies know that!”

My Grandma was not the gushy kind, never had been. I fled to her that day because I knew she would be straight with me. I knew Grandma always told the truth, and I knew that the truth always went down a whole lot easier when swallowed with one of her “world-famous” cinnamon buns. I knew they were world-famous, because Grandma said so. It had to be true.

Grandma was home, and the buns were still warm. Between bites, I told her everything. She was ready for me. “No Santa Claus?” she snorted, “Ridiculous! Don’t believe it. That rumor has been going around for years, and it makes me mad, plain mad!! Now, put on your coat, and let’s go.”

“Go? Go where, Grandma?” I asked. I hadn’t even finished my second world-famous cinnamon bun. “Where” turned out to be Kirby’s General Store, the one store in town that had a little bit of just about everything. As we walked through its doors, Grandma handed me ten dollars. That was a bundle in those days. “Take this money,” she said, “and buy something for someone who needs it. I’ll wait for you in the car.” Then she turned and walked out of Kirby’s.

I was only eight years old. I’d often gone shopping with my mother, but never had I shopped for anything all by myself. The store seemed big and crowded, full of people scrambling to finish their Christmas shopping.

For a few moments I just stood there, confused, clutching that ten-dollar bill, wondering what to buy, and who on earth to buy it for.

I thought of everybody I knew: my family, my friends, my neighbors, the kids at school, the people who went to my church.

“Is this a Christmas present for someone?” the lady behind the counter asked kindly, as I laid my ten dollars down. “Yes, ma’am,” I replied shyly. “It’s for Bobby.”

The nice lady smiled at me, as I told her about how Bobby really needed a good winter coat. I didn’t get any change, but she put the coat in a bag, smiled again, and wished me a Merry Christmas.

That evening, Grandma helped me wrap the coat (a little tag fell out of the coat, and Grandma tucked it in her Bible) in Christmas paper and ribbons and wrote, “To Bobby, From Santa Claus” on it.

Grandma said that Santa always insisted on secrecy. Then she drove me over to Bobby Decker’s house, explaining as we went that I was now and forever officially, one of Santa’s helpers.

Grandma parked down the street from Bobby’s house, and she and I crept noiselessly and hid in the bushes by his front walk. Then Grandma gave me a nudge. “All right, Santa Claus,” she whispered, “get going.”

I took a deep breath, dashed for his front door, threw the present down on his step, pounded his door and flew back to the safety of the bushes and Grandma.

Together we waited breathlessly in the darkness for the front door to open. Finally it did, and there stood Bobby.

Fifty years haven’t dimmed the thrill of those moments spent shivering, beside my Grandma, in Bobby Decker’s bushes. That night, I realized that those awful rumors about Santa Claus were just what Grandma said they were — ridiculous. Santa was alive and well, and we were on his team.

HEALTH to spare and FRIENDS that care…

And may you always believe in the magic of Santa Claus!

☆Copied and pasted from another page.

Whatever the situation you can find out how to get your kids to listen without all the nagging and yelling. We have been using a lot of the techniques that we’ve learned and it has made quite a difference in our home and I’m sure this program can help in your home as well whether you have one child or many.

Give it a try with a FREE CLASS!

**This post does contain affiliate links to products and/or services that we use. If you happen to click through a link and make a purchase we may earn a teensy-weensy small commission (at NO EXTRA cost to you) if a purchase is made through these links. These links help to support our family, our blog, and our homeschooling mission. This means that we can keep bringing you great recipes, ideas, and tips for FREE! Click HERE for a full disclaimer.

Are you stuck at home and getting a bit antsy? Well, check out this Free Freezer Meal Planning Success Guide from MyFreezeEasy.com to help you learn how to get started with Freezer Cooking.

I can tell you that Freezer Cooking has been a game-changer in our home and we have been eating quite a few of the meals I had prepared before the COVID 19 CHAOS hit here. It has been such a blessing to have so many meals already prepped in the freezer so that we don’t have to head to the grocery store very often right now. 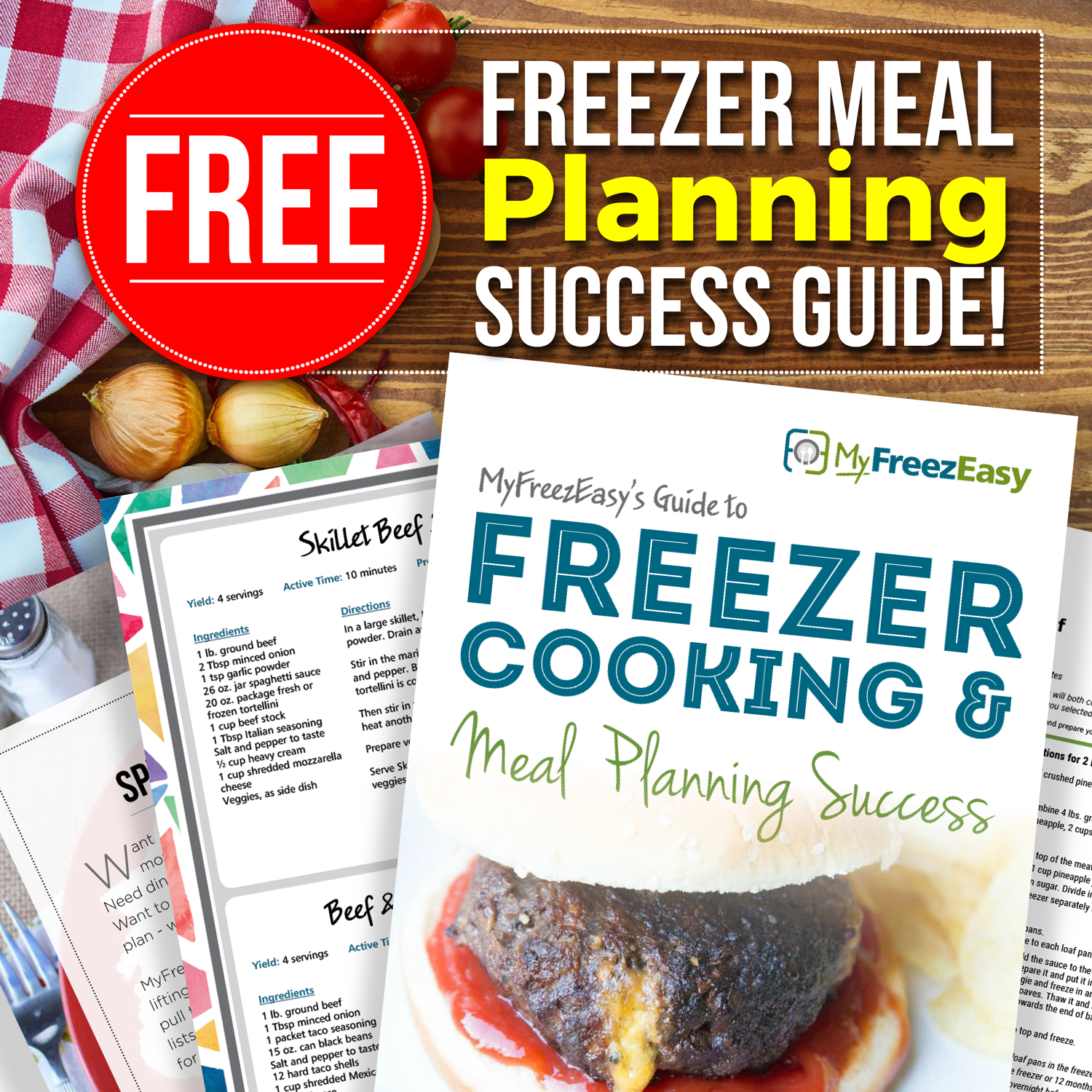 What are you waiting for? Go ahead and check it out right now!

Yep, I did it again. I also put a hole through the side of a cabinet… on purpose!

You might be wondering what in tarnation that I’m doing but trust me it was all for a good reason… well flooding the kitchen wasn’t planned but it all worked out.

END_OF_DOCUMENT_TOKEN_TO_BE_REPLACED

I guess everyone needs to learn to cook all of a sudden, even if home cooking wasn’t your norm before.

Want to learn along with your kids?Kids Cook Real Food, an awesome online video cooking class for kids, is supporting social distancing and all the families with lots of extra time on their hands… How about a two-week risk-free trial, and 80% off a two-month membership after that? 🙂

Get the details here, including a guide to making it work without going to the grocery store! https://sl290.isrefer.com/go/kcrf/happy2bmyownboss/

The past couple of days have been a doozy here. As you all know my kiddos have had the stomach bug, then Mr. Awesome caught it, and then I got it. It seems to be taking me a bit longer to get over it but today I do feel like I’m on the mend. I’ll spend today focusing on getting rehydrated and trying to eat a little bit.

Even if you aren’t sick I know this time is harder for some than for others. We are facing a lot of changes and uncertainties that we’ve never dealt with before.

END_OF_DOCUMENT_TOKEN_TO_BE_REPLACED

Are you craving apple pie but don’t have any apples? Here is your solution! Try this Whipped Pie Crust for the perfect flaky crust.

END_OF_DOCUMENT_TOKEN_TO_BE_REPLACED

This is another recipe that I’ve had since high school… it has always been a big winner in our home. I’ve come a long ways since Home Ec class and I rarely measure anything anymore but it’s a good thing I’m putting these recipes online as this one is getting so worn that the ink is smudging badly. I also like using a little bit of minced garlic in mine as well. You might also like this recipe: Mama’s Secret Spaghetti Sauce.

END_OF_DOCUMENT_TOKEN_TO_BE_REPLACED

I love eclairs and I remember our 5th Sunday church dinners and someone would ALWAYS bring this delicious dessert along. It is so easy but everyone will LOVE you for bringing it!

Note: It tastes best if you can let it sit in the refrigerator overnight. Also, if you warm the frosting for a few seconds in the microwave it will make frosting the cake easier.

END_OF_DOCUMENT_TOKEN_TO_BE_REPLACED

You will need to use the Apple Pie Filling For Canning for this recipe or maybe check out this recipe for Apple Crisp in a Crockpot. I’ve never tried this with store-bought apple pie filling but it might work as well.

END_OF_DOCUMENT_TOKEN_TO_BE_REPLACED

I love mushrooms of every kind and I am always trying to add them to so many dishes because of their amazing health benefits. This is one of my favorite mushroom recipes.

I don’t like that you don’t use all of the mushrooms and a whole pepper but those can be frozen and used later.
END_OF_DOCUMENT_TOKEN_TO_BE_REPLACED

This recipe is so easy but I forgot that I even had it! The original recipe calls for Rotell past (little wheels) but you can use just about any pasta that you might have on hand.